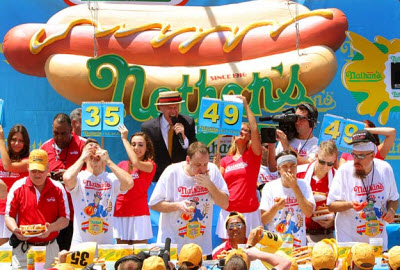 He's won the annual Nathan's Hot Dog Eating Contest every Independence Day since 2007, but can Joey Chestnut keep it up at age 31?

This Saturday is Independence Day, so it's almost time for the annual Nathan's Hot Dog Eating Contest at Coney Island, New York.

Every year, the contestant who can eat the most hot dogs,bun included, in 10 minutes is declared the winner. American Joey Chestnut has won the contest every year since 2007, usually consuming at least 60 hot dogs along the way. Why not wager on this year's outcome? Current odds put Chestnut's over/under at 65.5.

Bet on entertainment at Bovada and get a free 50% sign up bonus.

Let's take a closer look at this year's odds. If we exclude Chestnut's 2007 victory, which had a 12-minute time limit, the Vallejo, California native has exceeded 65.5 hot dogs three times out of seven.

Chestnut has reportedly been training vigorously for this year's event, hoping to fend off the challenge from the latest eating star, Matt Stonie.

That could be enough to push Chestnut beyond 65.5 hot dogs, but there's also concern he could be near the end or even past his competitive eating peak at age 31.

Needless to say, the 2015 Nathan's Hot Dog Eating Contest is televised on ESPN2 with live coverage starting at noon Eastern.

What are you waiting for? Get your entertainment odds at Bovada today.