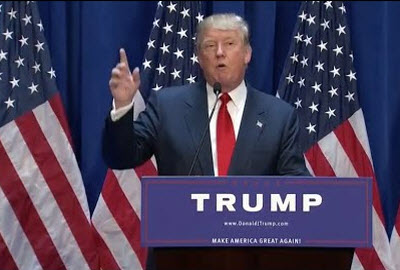 It isn't a slam-dunk yet, but it looks like we're headed for another political battle between the Clintons and the Bushes.

At press time, Hilary Clinton is the odds favorite on the Political Props menu to win the Democratic presidential nomination for 2016, and Jeb Bush is ahead of the Republican pack at 3/2.

Spice up your summer with a wager on the Presidential Nomination race. Bet on entertainment at Bovada and get a free 50% bonus.

Naturally, anything can happen between now and next July when the two parties hold their national conventions; Clinton was originally favored to beat Barack Obama in 2008.

But as it stands, there's plenty of value to be had betting on Clinton, even at these chalky odds. She doesn't face any serious opposition on the Democratic side. Bush seems like the obvious GOP choice, as well.

What about a surprise upset? Donald Trump Presidential Nomination odds (33/1) could bring loads of cash into the pockets of those who believe he will keep momentum and eventually shred Jeb Bush hopes to pieces.

Looking past the nominations, the Democrats are currently listed at –170 to win the 2016 presidential election. However, you can also bet on Clinton specifically at even money, or on a woman to become president at –115. Since Carly Fiorina (66/1), Elizabeth Warren (75/1) and Kirsten Gillibrand (150/1) are the only other women on the odds list at press time, taking Clinton at 1/1 is where the value lies.

What are you waiting for? Get your entertainment odds at Bovada today.