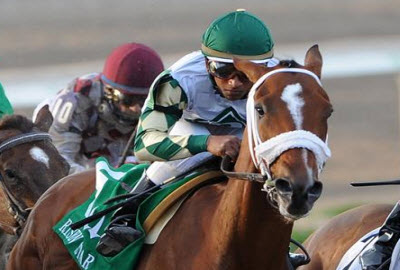 Defending champion Fort Larned is in the lineup, along with top contenders Game On Dude and Will Take Charge. 2012 Breeders’ Cup Classic (G1) winner Fort Larned will attempt to defend his title in the 2013 running of the 1 ¼ mile event for 3-year-olds and up.

A son of E Dubai, Fort Larned is having a less successful season than last year, winning just one graded-stakes race since his Classic triumph a year ago. He did not finish in the Gulfstream Park Handicap (G2) at Gulfstream Park on March 9 and came in fifth in the Oaklawn Handicap (G2) at Oaklawn Park on April 13. Fort Larned then captured the Stephen Foster Handicap (G1) at Churchill Downs on June 15 – a “Win and You’re In” event for the Classic, guaranteeing the Ian Wilkes trainee a spot in the race. The 5-year-old turned in a fifth-place performance in the Whitney Invitational (G1) at Saratoga on Aug. 3 before winning the Homecoming Classic Stakes at Churchill Downs on Sept. 28 in his final Classic prep. Fort Larned has earned $4,171,322 from 24 career starts and is 10-2-1; he turned in a bullet five-furlong breeze at Churchill Downs on Oct. 22 timed in 1:00.60.

Looking to finally win a Classic title after two previous attempts is Game On Dude, last year’s favorite. Runner-up in 2011 and a disappointing seventh in 2012, Game On Dude has had a stellar season this year. The 6-year-old Awesome Again gelding has not lost a race since his Classic defeat. He began the year at Santa Anita, winning the San Antonio Stakes (G2) Feb. 3 and the Santa Anita Handicap (G1) on March 2. He won the Charles Town Classic (G2) at Charles Town on April 20 before heading to Hollywood Park and capturing the Hollywood Gold Cup Handicap (G1) on July 6. He then won the Pacific Classic (G1) at Del Mar – a “Win and You’re In” race for the Classic – as his final prep. The Bob Baffert trainee went a bullet six furlongs in 1:11.40 on Oct. 22 on his home track of Santa Anita Park; he has earned $5,602,158 so far and is 27-15-5-1.

Making an ambitious first start against older horses in the Classic is Will Take Charge, a 3-year-old son of Unbridled’s Song. Will Take Charge, trained by D. Wayne Lukas, ran in all three Triple Crown races this year but finished eighth, seventh and 10th respectively. His short stint at Saratoga was more successful: he finished runner-up in the Jim Dandy Stakes (G2) on July 27 and won the Travers Stakes (G1) on Aug. 24. His final Classic prep was a win at Parx Racing in the Pennsylvania Derby (G2) on Sept. 21. Will Take Charge is 5-2-0 from 13 starts and has earned $1,827,371; his first workout at Santa Anita Park was a five-furlong move timed in 59.40 on Oct. 26.

The Classic is shaping up to be a deep field, with Mucho Macho Man, Moreno, Declaration of War, Belmont Stakes (G1) winner Palace Malice, Ron the Greek and Flat Out among the rest of the contenders.

Last year’s runner-up, Marketing Mix, will be looking for redemption in the 2013 renewal of the $2M Breeders’ Cup Filly & Mare Turf (G1). Stretching out to the 1 ¼ mile distance is European invader Dank, who won the Beverly D. Stakes (G1) at Arlington last out. Laughing, winner of her last four, is another serious contender, along with Tiz Flirtatious, who has won her last two.

A year after winning the $1M Breeders’ Cup Filly & Mare Sprint (G1), Groupie Doll will be mounting a title defense. The 5-year-old is trained by Buff Bradley and will be going into the Breeders’ Cup off a defeat in the Thoroughbred Club of America Stakes (G2) on the all-weather track at Keeneland. Teddy’s Promise and Starship Truffles are also among the top contenders.

Mizdirection will be looking to be re-crowned Turf Sprint champion in this 6.5-furlong test for 3-year-olds and up. The 5-year-old mare is coming off a fifth-place finish in the Just a Game Stakes (G1) at Belmont. Caracortado, Michael Machowsky’s charge, was fifth in this race last year and is looking to better that result. Third-place finisher Reneesgotzip, another female horse, may again vie for the top spot.

Get great horse racing odds on all the day's races at Bovada Racebook. Get back 3% of all straight bets: Win, Place and Show (excluding Place and Show wagers that pay out $2.10 or $2.20 on a $2 bet). Get back 5% of all exotic wagers: Quinella, Exacta, Trifecta, Superfecta, Daily Double, Pick 3, Pick 4, Boxes and Wheels. Visit Bovada Racebook to learn more.

We have 68 guests and no members online