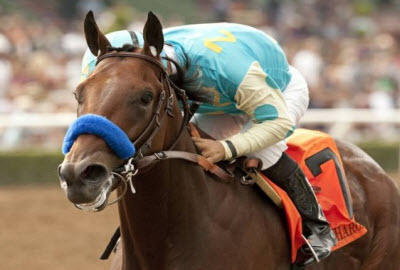 The 140th running of the $1,500,000 Preakness Stakes takes place on Saturday, May 16 at Pimlico Race Course in Baltimore, Maryland.

The top three Kentucky Derby finishers American Pharoah, Firing Line and Dortmund, are making their way over to the historic racetrack to compete in the second leg of the Triple Crown.

It's looking as though American Pharoah will attempt to secure another victory, though his competitors certainly demonstrated on May 2 that they were perfectly capable of disrupting his winning streak.

Hot off his Kentucky Derby victory, the undefeated Bob Baffert-trainee is favored to win this year's Preakness Stakes. He's won every race he's ever run but once again faces stiff competition from both Dortmund and Firing Line.

The first Preakness Stakes ran three years later in 1873.The race itself got its name from the colt who won the inaugural Dinner Party Stakes on the day the track opened.

Today, the Preakness is a Grade 1 event (9.5 furlongs, dirt, 3-years-old) with a purse of $1 million. Well over 100,000 people are drawn to this race, forming the largest crowds ever to see a sporting event in Maryland.

PP1 Kentucky Derby winner American Pharoah (4/5) is set defend his undefeated record at Pimlico as he competes for his second jewel of the Triple Crown.

PP2 Bob Baffert-trained Dortmund (7/2) was undefeated when he finished third in the Derby. He gave American Pharoah some heavy competition.

PP3 Mr Z (20/1) finished third to American Pharoah in the Arkansas Derby before the Kentucky Derby. The young colt has one win in 13 starts but has eight placings to his credit.

PP4 Danzig Moon (15/1) is a fifth-place Derby finisher and took second place in the Blue Grass Stakes, but he has yet to put on a truly impressive performance.

PP5 After breaking his maiden race in his sixth try Tale of Verve (30/1) is on his way to the Preakness Stakes after being considered for the Derby.

PP7 Firing Line (4/1) has landed in the money in all four of his graded stakes races, including a very impressive second -place finish in the Kentucky Derby.

PP8 Coming off of his first graded stakes victory in the Lexington Stakes, Divining Rod (12/1) finished in the money for every race he's entered and should be right on target for Preakness.

Where to bet online on the 140 Preakness Stakes

5Dimes Rebate Racebook offers cash rebates of up to 9% on your daily bet volume, win or lose, every single day

5Dimes Plus 10% Racebook offers an additional 10% to any winning, WIN or Exotic ticket at MAJOR tracks

The 140th running of the Preakness Stakes takes place on Saturday, May 16. Post Time is 6:05PM EST. NBC will broadcast the race live.

We have 16 guests and no members online