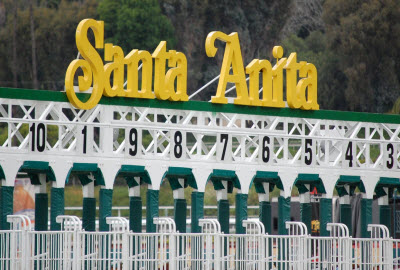 It’s nearly time for the 2014 Santa Anita Derby and our preview of the entries will take a closer look at the entire field.

The most successful Santa Anita Derby winner in recent years was I’ll Have Another who won the race in 2012 before going on to win the Kentucky Derby and the Preakness Stakes.  I’ll Have Another had the Triple Crown in his sights but was unfortunately injured and subsequently retired and put to stud in the hours leading up to the Belmont Stakes.

Those that love to bet on horse racing should sign up for an account at Bovada Sportsbook.  They are offering anyone who clicks on our link to sign up a 20% cash bonus on top of their first deposit and you can use the free money to bet on the Santa Anita Derby as well as daily races from tracks all around the world!

Hoppertunity – Sired by 2007 Kentucky Derby entry Any Given Saturday, Hoppertunity has enjoyed the distance of a mile or longer just like his father.  He’s fresh off a win in the Rebel Stakes in his 2nd try at longer than a mile and has already ran twice at Santa Anita Park while breaking his maiden on this dirt.

Candy Boy – Sired by the undefeated Candy Ride, this member of the 2014 Santa Anita Derby field recently won the Robert B. Lewis Stakes on only his 2nd try on real dirt.  Candy Boy’s pedigree suggests that he’ll be better on turf than dirt but that didn’t stop another Candy Ride kid from winning the Santa Anita Derby a few years ago when Sidney’s Candy did so.  Candy Boy has raced 6 times in his career while finishing no worse than 2nd in his last 4 tries.

Rprettyboyfloyd – Lightly raced 3-year-old failed in 2 attempts to break his maiden before finishing 3rd in the San Vicente Stakes last time out.  Rprettyboyfloyd has never raced at a mile distance but does have the luxury of having all 3 career races at Santa Anita Park.  This guy has tons of potential as he is sired by Bluegrass Cat who was 2nd in the Kentucky Derby and the Belmont Stakes in 2006.

Friendswith K Bill – This hrose is still trying to figure out where he belongs and has already ran on 3 different surfaces.  The good news for Friendswith K Bill is that he took 1st in his 1st run at a mile or longer right here at Santa Anita Park, but the bad news is that it came on turf instead of dirt after finishing 4th in a maiden-breaking effort in his only dirt run.

Big Tire – Another Candy Ride offspring that has failed to win 5 times at maiden-breaking levels.  Big Tire has 4 races at 1 mile or longer but has flashed potential in recent dirt races after finishing no better than 4th on turf.  Since those turf races ended Big Tire has finished 2nd in both dirt races and could take a surprising jump forward at the 2014 Santa Anita Derby.

Schoolofhardrocks – This lightly raced 3-year-old broke his maiden at a mile on dirt at Del Mar before finishing 4th in the San Felipe Stakes here at Santa Anita Park next time out.  Schoolofhardrocks was sired by Rock Hard Ten who finished in the top 5 in the Santa Anita Derby, Preakness Stakes, and Belmont Stakes back in 2004.

Dublin Up – Sired by Unbridled’s Song who won the Breeders’ Cup Juvenile in 1995 before taking home the Florida Derby and the Wood Memorial and finishing 5th in the Kentucky Derby.  Dublin Up hasn’t shown much in 3 career races at the maiden level but looked better than ever while finishing 3rd at Santa Anita Park last time out in his first career race at longer than 7 furlongs.