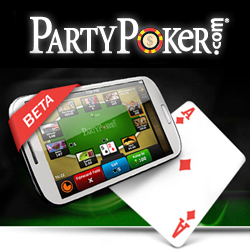 Partypoker is among the online poker sites that have just ventured to the mobile application industry. Last December 2012, Partypoker and the people behind Bwin.Party Digital Entertainment have launched a new offering in the form of an application of their software compatible with both smartphones and tablets powered by Android. It was announced shortly after they revamped their monthly tournament guarantee to a staggering $15 million.

With the Partypoker app, people can now access both play-money and real-money poker variations including Texas Hold’em cash-game tables through their Android-operated devices. Players can only sign up for a play-money account from the app. They must create an account intended for real-money and deposit from the PC download version of the Partypoker software in order to participate in real-money matches.

Another feature of the Partypoker app is the FastForward Poker. It is a form of a ‘speed poker’ that gives players the option to fold instantly and be moved to the next table. According to Partypoker, this addition promises four times as many hands as the traditional kind of poker. The app comes with detailed tutorials of this new concept to guide members on how to maximise their experience.

In addition to these offerings, the Partypoker app also has a section dedicated to their community, just like its predecessor. In this virtual lounge, poker players from all backgrounds can meet one another and share personal tips. Seasoned members can also use it to help new ones on how they can improve their skills in the game. It is also available in multiple languages, including French and German.

The Partypoker app is only compatible with devices that run in Android 2.1 or higher, and requires users to log in with their existing account details. New users can go through their website to sign up.

It is still in its beta mode, so withdrawals as well as deposits cannot be made via the Partypoker app as of yet. Players are also expected to experience a few setbacks such as connection problems and bugs during usage. If these problems persist, it is advised to report them directly to the Partypoker team immediately.

We have 15 guests and no members online