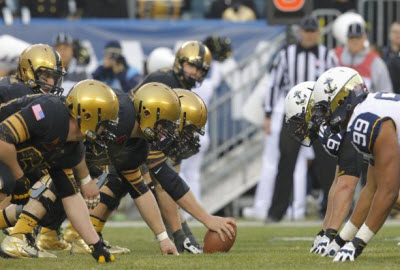 The Midshipmen wrap up their 2015 college football season this Saturday when they welcome the Black Knights to Lincoln Financial Field in Philadelphia this Saturday.

Bowl season is just around the corner, but there's one more game to take care of first: the annual Army vs. Navy game.

These two service teams first met in 1890 and have played every year since 1930. Each side has enjoyed its dominant periods, but for now, Navy is in full command of this rivalry, winning each of the last 13 games at 8-5 ATS.

When considering the best picks for the game, the Black Knights have covered three of the past four games, including their 17-10 loss to the Midshipmen (–16.5 away) in 2014. The under is also on a nine-game winning streak in this matchup.

As usual, Navy is powered by the “wishbone” triple-option offense of head coach Ken Niumatalolo, now in his eighth year at Annapolis.

Army also runs the triple-option under second-year coach Jeff Monken – both he and Niumatalolo were assistants under Paul Johnson when Johnson led Navy to four straight bowl appearances in the mid-2000s.

We have 27 guests and no members online