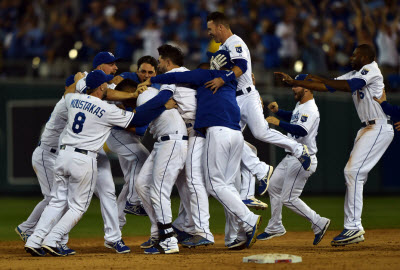 Odds makers are crunching numbers ahead of the Mets and the Royals squaring off in Game 2 of the World Series on Wednesday night in Kansas City.

First pitch is at 8:07 PM ET with FOX providing the television coverage.

Both the New York Mets and the Kansas City Royals will be sending out their aces in Game 2 of the 2015 World Series with Jacob deGrom (2.70 FIP) starting for the visiting Mets will the Royals will respond with Johnny Cueto (3.53 FIP).

Jacob deGrom has been lights out in the postseason so far. The right hander has won all three of his starts, allowing four earned runs in 20.0 innings of work.

All three of those starts have happened on the road (twice in Los Angeles, once in Chicago), but this will be the first time that deGrom has faced Kansas City. However, deGrom has been spectacular all season and doesn't seem fazed by the spotlight.

The Royals counter with Johnny Cueto, who is 1-1 in three postseason starts with an ERA of 7.88. He didn't get out of the third inning in his last outing in Toronto as Cueto was hit hard for eight earned runs on six hits.

However, he has been slightly better at home; he gave up six earned runs in two home starts against Houston. Cueto has seen the Mets 11 times in the past from his time in Cincinnati.

Get your MLB odds and bet on baseball at Bovada now offering free 50% sign up bonus.